Monday, April 3, 2017
$100 Million in Local and Federal Funding Will Be Available 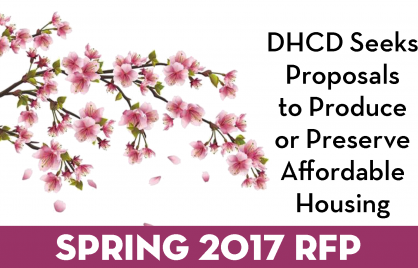 In the RFP, DHCD will  prioritize projects that primarily serve households earning below 30 percent of the Area Median Income (AMI) or between 31 percent-50 percent of AMI. In addition, DHCD will give consideration to projects that include Permanent Supportive Housing (PSH) units.

The RFP is available for review at: https://goo.gl/DvyJ6R. Online applications will be available beginning April 14, 2017, and must be submitted in DHCD’s online submission system before June 14, 2017. No hard copy submissions will be accepted.

How to Learn More

A pre-orientation for developers interested in submitting a proposal will be held by DHCD’S Development Finance Division (DFD) on Thursday, April 13, 2017, from 10 am to 12 pm at DHCD Housing Resource Center, 1800 Martin Luther King Jr. Avenue SE.

Developers seeking LIHTCs should note that DHCD’s draft Qualified Allocation Plan (QAP) is available for review at http://dhcd.dc.gov/publication/2017-dhcd-low-income-housing-tax-credit-qualified-allocation-plan-draft. DHCD will hold a hearing on the QAP on Monday, April 10, 2017 from 6:30 p.m. to 8:00 p.m. at the Housing Resource Center. Comments on the QAP can be sent to [email protected] or mailed to DHCD, Attn. Danilo Pelletiere, Housing Development Advisor, Office of the Director, 1800 Martin Luther King Jr. Avenue SE, Washington DC 20020.

Mayor Muriel Bowser announced the next affordable housing steps in her inclusive prosperity platform as part of her March 30 State-of-the-District address. She will once again invest an unprecedented $100 million in the HPTF. She is launching a new initiative: $10 million dedicated solely to a new private-public housing preservation fund.

Since taking office, Mayor Bowser has made affordable housing a major focus of her administration. The District’s $100 million HPTF is more than any city per capita in the country. A report issued by Center for Community Change shows that the District’s fund more than tripled the next highest fund amount for a U.S. city. Compared to states, the District’s trust fund is the country’s second largest.

The Mayor noted in her address that the District is not just holding onto this money…“We are putting it out in the street.” In October, the Mayor celebrated a record HPTF investment for FY 2016: $106.3 million supporting 19 projects that will produce or preserve more than 1,200 affordable housing units across the city. And in the first five months of FY 2017, one half of the HPTF already is allocated to projects that will produce and preserve affordable housing across four Wards.