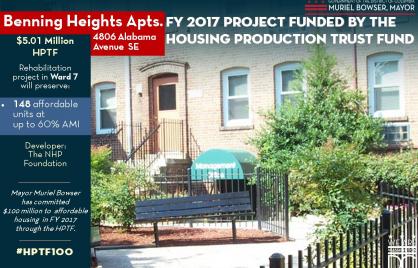 (WASHINGTON, DC) – The DC Department of Housing and Community Development (DHCD) has closed a loan with The NHP Foundation (NHPF), a national non-profit affordable housing developer, that will preserve 148 affordable housing units in the Ward 7 neighborhood of Fort Dupont Park.

As a result of these financing efforts, all 148 units will remain affordable to households earning no more than 60 percent of the Area Median Income (AMI) for at least the next 40 years.

This is the second recent financing deal with NHPF. In September 2016, DHCD provided the developer with $6.4 million in HPTF financing for a rehabilitation project at Parkchester Apartments, a 93-unit apartment complex at 2704 Wade Road SE in Ward 8. All units there are dedicated for households earning up to 50 percent AMI.

“Public and private partnerships are crucial in providing affordable housing in the District, and this latest project is an example of the success that comes when the public and private sectors join forces,” said DHCD Director Polly Donaldson. “Here, both the Bowser Administration and The NHP Foundation worked together to fulfill a common goal—that District residents have access to safe and affordable housing. With both the Parkchester and now Benning Heights, this partnership is resulting in the preservation of over 240 affordable housing units.”

“Benning Heights Apartments are a significant part of the affordable housing landscape in the Ft. Dupont Park neighborhood of Washington D.C.,” said NHPF President and CEO Richard Burns. “The renovation continues our mission to benefit individuals and families in one of D.C.'s up and coming vibrant communities.”

The unit mix will accommodate both individuals and families, consisting of 54 one-bedroom units, 84 two-bedroom units and 10 three-bedroom units. The specific AMI breakdown is as follows:

In Fiscal Year 2016, DHCD invested more than $126 million in local and federal resources to produce and preserve about 1,200 affordable housing units along with several community development projects.

In October 2016, Mayor Bowser announced an unprecedented investment of $106.3 million from the HPTF. She has committed $100 million annually to the HPTF each year of her administration—more than any city per capita in the country. A report issued by Center for Community Change shows that the District’s $100 million fund more than tripled the next highest fund amount for a U.S. city. Compared to states, DC’s trust fund is the country’s second largest.

In November, the mayor released a final report from the DC Housing Preservation Strike Force detailing a proactive, multi-pronged strategy for the District to use in preserving its existing supply of affordable housing. She also announced the selection of 13 projects that will produce or preserve more than 1,200 affordable housing units across the city.

And in December, she announced major enhancements to the District’s homebuyer programs that will give District residents who are first-time homebuyers more purchasing power and a greater pathway to homeownership.