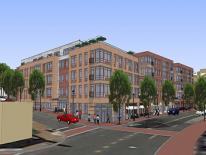 The Big K site in Ward 8 is one example of how the DC Department of Housing and Community Development (DHCD) is transforming vacant and/or abandoned properties in the District. The site has been abandoned for over 30 years, but within approximately the next two years, it will provide new affordable housing and retail for Ward 8 residents.

What Is The Big K Site?

The Big K site is an assemblage of four District-owned parcels at 2228 – 2252 Martin Luther King Jr. Avenue SE, at the corner of Morris Road. Three of the four parcels are located in the Anacostia Historic District. Two historic single family properties and one commercial building are located on the site.

On June 4, 2012, DHCD’s Property Acquisition and Disposition Division (PADD) released a Solicitation for Offers (SFO) for the development of The Big K site. The SFO sought a development proposal that would use creative ways to rehabilitate and adaptively re-use the remaining buildings. The end result will be a vibrant, mixed use development that promotes walkability and provides neighborhood-serving retail.

The project was awarded to Chapman Development on November 1, 2012 and DHCD entered into a Property Disposition Agreement with 2228 MLK, LLC (a development entity formed by Chapman).

The $50 million development project, at 2228 Martin Luther King Jr. Avenue SE, is named Maple View Flats and will have the following features:

The historic homes will be moved to a new site in Ward 8 and restored, beginning in early 2017 and ending by fall 2017. In addition, three new construction homes will be built on the site, designed and developed based on the approved Neighborhood Pattern Book for the Congress Heights, Anacostia and Saint Elizabeths (CHASE) communities.